The thermocouple is a temperature measuring device which works based on principles of following effects. 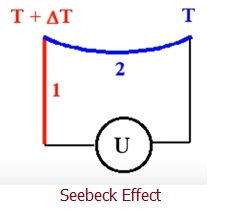 When the junctions of two different metals are maintained at different temperatures, the emf is produced in the circuit. This is known as "Seebeck Effect". 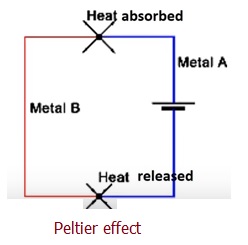 Whenever current passes through the circuit of two dissimilar conductors, depending on the current direction, either heat is absorbed or released at the junction of the conductors. This is called as "Peltier Effect".


The thermoelectric effect is the direct conversion of heat differentials to electric voltage and vice versa. The good thermoelectric materials should possess large seebeck coefficients, high electrical conductivity and low thermal conductivity. The examples of such materials are Bi2Te3, PbTe, SiGe and Bi-Sb.