Introduction:
These terminologies are applicable to digital signal being carried over wired or wireless medium. The digital signal over the medium goes through various impairments such as noise, jitter, interference, I/Q gain and phase mismatch etc. BER and PER are used to verify performance of both wired (e.g. fiber, ethernet, cable) as well as wireless systems (e.g. microwave, satellite, wifi, zigbee, gsm, lte). 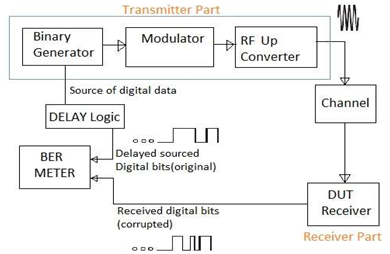 • It is defined as ratio of number of received bits in error to total number of bits transmitted during the test time period.
• It is unit less and measured in percentage.

• BERT (BER tester) is used for the measurement of BER (Bit Error Rate).
• BER performance is measured over short time as well as long time. This measure provides short term and long term stability performance of the system before deployment for use by customers.
• BER or PER can be improved by using robust modulation schemes and forward error correction codes (Convolution encoding, CTC etc.). For example, BPSK is more robust than QPSK and QPSK is more robust than QAM and so on.

• As we know packet or frame consists multiple number of bytes. One byte equals eight bits. For example one packet can carry 1518 bytes in ethernet system as per IEEE 802.3 standard.
• It is good to check performance of systems at packet levels in order to determine whether the problem is at bit level or packet level.
• Packet Error Rate (PER) is defined as ratio of number of packets received in error to total number of transmitted packets.
• A packet is said to be in error even if there is only one bit is erroneous. The figure below shows plot of PER vs SNR for one of the wireless system for various modulation schemes. 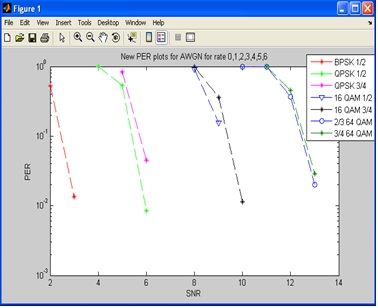 • Following equation mentions relationship between BER vs PER. This is valid for ideal communication system which transmits data over binary symmetric channel with uncorrelated noise.

• In the formula "n" denotes number of bits in a packet, Pb denotes bit error rate (BER) and Pn denotes packet error rate (PER).
• The PER is determined exclusively by the BER and the number of bits in the packet's data payload and is not dependent by how the data is encoded or what happens during the transmit-receive process. Therefore the relationship between PER and BER is given by following formula.
➤ PER = 1 - (1-BER)n