Definition: The device which measures degrees of thickness or density of material is known as densitometer. The material can be semitransparent, transparent or reflecting surface.

It consists of light source and photo-electric cell. It determines optical density of sample material placed between these two elements. Based on material or surface there are two types of densitometer viz. transmission densitometer and reflection densitometer.

Densitometer is widely used in photography applications to measure photo-graphic density of image printed on film or print. It is also used to calibrate printers and other printing equipments. It is used to measure saturation of particular color in the image. 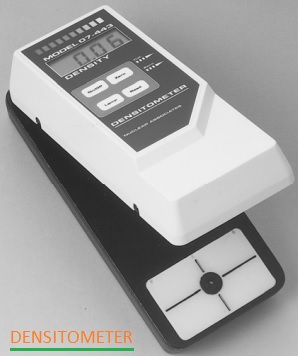 
Other optical test and measurement equipments