T-test vs F-test vs Z-test | Difference between T-test, F-test, Z-test

What is hypothesis:
• It is a predictive statement capable of being tested by scientific methods.
• Hypothesis is simple proposition which can be proved or disproved through various scientific techniques.
• It establishes relationship between independent variable to some dependent variable.
• All these three are hypothesis tests.
• Entire decision to validate or to refuse the null hypothesis is based on these tests. Hence it is essential to choose the right test. 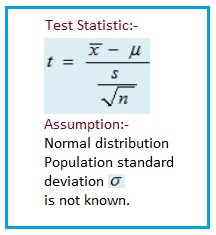 • It is a univariate hypothesis test.
• It is applied in condition when standard deviation is not known and sample size is small (n < 30).
• It is used to compare means of two populations.
• T-test is commonly used compare to z-test as explained below.
• Test statistic and assumption for T-test is mentioned for one sample test. Similarly two sample t-test, paired t-test are performed for various applications. 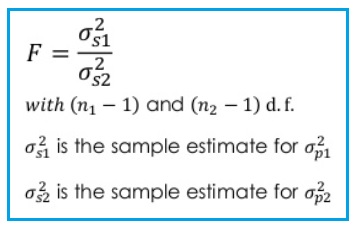 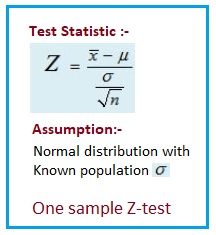 • It is also statistical hypothesis test which follows normal distribution.
• It is applied to moderate to large samples (i.e. when n > 30).
• It is used to determine whether two population means are different when variances are known and sample size is large as mentioned.
• Z-test depends on certain conditions in order to be reliable. Hence it is less adaptable compare to T-test.
• Z-test is preferable compare to T-test when standard deviation values are available or known.
• Test statistic and assumption for Z-test is mentioned for one sample test.